Notes on a Grubbies Christmas...Santaphobia, a refreshing Nativity and the Gummies


Are your children frightened of Father Christmas?

We’ve had a few bust-ups with Jolly St. Nick over the years. We did the obligatory grotto visit when our eldest daughter was about to turn one. She howled; I tried desperately to catch a decent photo. Year two, she appeared genuinely excited as we queued on Southend-on-Sea pier to see Santa.**  But as soon as the Elf called her name, she inhaled deeply and then threw herself at me screaming, genuinely terrified. Dear old Santa even stepped outside his grotto to say a gentle hello but it didn’t help. She briefly recovered long enough to accept the offered gift (“Aged 2-3, Girl” – don’t blame ELC, it starts in Lapland) but was visibly shaking when I strapped her in the car. I felt dreadful.

The following year, she refused to let me put her stocking in her room and we agreed to hang it on her door. She had always been a very careful child and, quite reasonably, she decided she did not like the idea of a large, bearded stranger creeping around her room when she slept. Perhaps that is why some families (is it an American thing?) hang stockings over the fireplace (or radiator) rather than in bedrooms.

Our daughter is now five. I really, really hope she believes in Father Christmas and I assume, if only because she’s five, that she must. But, and I admit this very tentatively, neither of our children seem quite as excited about a visit from St. Nicholas as I remember being. I don’t know what it is. A friend has the theory that these lucky, lucky children of ours are capable of less wonder than the generations before them. They are Disneyed and wowed out. That same friend just got back from one of those glitzy Lapland long weekends and was disappointed to observe that the main event, the audience with the Big Man, fell a little flat with anyone under 30. In fact, when asked for the highlight of the chilly weekend, her three year old said, “Seeing a reindeer”. Her five year old offered, “Beating Mum at Connect 4”.***

Santaphobia, as it turns out, is not unusual. Parents.com offers some helpful tips to keep your children happy long enough to capture the prize grotto photo. If that seems a bit like unnecessary torture, then perhaps keep your family Santa tradition a bit more arm’s length. If you haven’t found it already (and we’re sure you have), Portable North Pole is a brilliant way to bring the grotto to your home and it had the children completely fooled. Or, just write him a letter. I'm afraid you’ve missed the early December deadline for the Royal Mail’s charming reply service (Santa needs time to reply to the 800,000 British children who write to him every year) and similar services offered by charities including the NSPCC and RNIB. We don’t tend to get round to Santa letters until much nearer Christmas in our house, but in any event, the children don’t expect a reply. The real excitement comes on Christmas morning when you find out whether your letter made it to the North Pole, whether you've been too naughty or just nice enough and, more importantly, whether your wished for toy was "in stock".

Since writing our previous note on the trials and triumphs of The Nativity Play, I was reminded about the refreshing approach taken by a little local pre-school where one of the Grubbies clan used to go.
Theirs was an entirely child-led Christmas production. Children chose their own parts resulting in two Marys, a four year old Baby Jesus (wearing trendy onesie pyjamas) and just the one king. If they didn't like the suggested costume, they just wore whatever they fancied. There were a few hiccups - Baby Jesus tried to open one of the offerings and had to be reminded he was only a baby. The Innkeeper, when asked if he had a stable instead of a room said "Sorry, no, I absolutely haven't got a stable either". After the Nativity, the children each took to the stage and sung a song or did the sort of expressive, interpretive dances that only three and four year olds can do. It may have been a less polished performance than those we are treated to at big school, but I bet the parents and children will treasure the memory for many years. 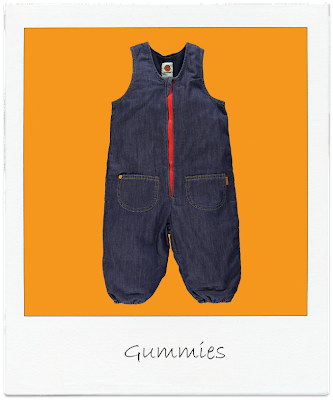 Today's Christmas present is 15% off our snuggly, jersey-lined, beautifully-soft Gummies, perfect for the tiniest boys and girls wriggling to escape from Santa. This year you can choose a festive poppy red zip (extra long for emergency exits to save fiddling with poppers). Use discount code "Gummies15" at check-out until tomorrow (13 December). Like Santa, P&P on UK Grubbies orders is free until Christmas. ** I have no idea if the same Father Christmas still mans the grotto on Southend-on-Sea pier but in case you are down that way, the one we met was a fabulously authentic model, all silvery hair, bona fide beard, rouged cheeks and deep, kindly voice.

*** Speaking very personally, I never fancied the idea of transporting the family to Lapland to meet Santa in the flesh. If you are tempted, then Sophie Butler over at the Telegraph is an authority on the subject.

Email ThisBlogThis!Share to TwitterShare to FacebookShare to Pinterest
Labels: Grubbies notebook, Then and now, What we make